"This 100% Merlot could be mistaken at first for Cabernet Sauvignon, so structured and bold it initially appears. Cassis, blackberry, spicy clove and pepper combine effortlessly against a layered concertration of body and weight, finding structure along the way. Drink now through 2021." - Wine Enthusiast

"Upfront red currant and plum fruit marks this well-composed proprietary blend that offers juicy, leathery texture and plenty of muscle to make an impact. Structured, it could be cellared if need be but is entirely drinkable right now." - Wine Enthusiast

"Full-bodied, structured and leathery, it’s characterized by a combination of plum and gamy meat, accented by a taste of black olive tapenade. It finishes smooth and toasty." - Wine Enthusiast

"The color of this 100% Cabernet is as black as a moonless midnight sky. It’s saturated with power and explodes on the palate with rich blackberries and chocolate. Those famous Mount Veeder tannins are tight and astringent, but the fruit is so intense, it busts right through them. This is a seriously ageable wine. Give it at least six years, depending on your taste for older Cabs. It should be going strong through 2025." - Wine Enthusiast "Cellar Select" 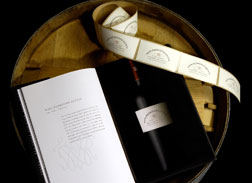