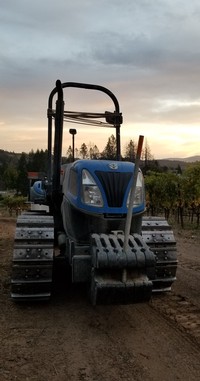 The 2020 growing season started off with the driest February on record after a very dry 2019. We only recorded around 12’ since the beginning of the year and usually we should be well on our annual total of 50’-60’. Not only were we driest February but we were enjoying Spring-like weather with temperatures reaching into the 80s by the end of the month. This led to an earlier bud break to start of our 2020 growing season.

There was some worry about frost as we had colder temperatures in late March and into April, but by the third week of May it warmed up significantly and pushed us through bloom. As the summer weather hit in late June, the fruit set looked good and we began to see some great yields in the vineyard. Our veraison was a little early which came in July and had the middle of the valley start predicting an early harvest. The valley floor began harvesting in August and then on August 16 the Lightning Complex Fire began on the east side of the Napa Valley. The winds were favorable for our vineyard as the smoke blew east.

By middle September the fires were out and we were in the vineyard checking brix (sugar levels) and pH.  We were ahead of last few year by about two weeks and began our Viognier harvest on September 15th.   We were getting excited and picked some Merlot and Cabernet Franc for some of our vineyard partners on September 24th and had plan to pick some of our varietals the following week. However, like any well-planned schedule, you have to adapt with the changes.

On September 27th we woke up to news of a fire that began north east in Napa County. We were not to concerned for our vineyard but of course listening to the devastation of our Napa friends and lending any assistance possible. That evening the fire jumped the valley and began coming down the west side toward our vineyard and into Santa Rosa. We now faced some tough decision but went into a picking frenzy on the morning on September 30th thru October 3rd, picking over 50 tons to try and save it from damage the smoke could case. On October 3rd we called our harvest complete, by far the earliest harvest ending in the history of our vineyard.